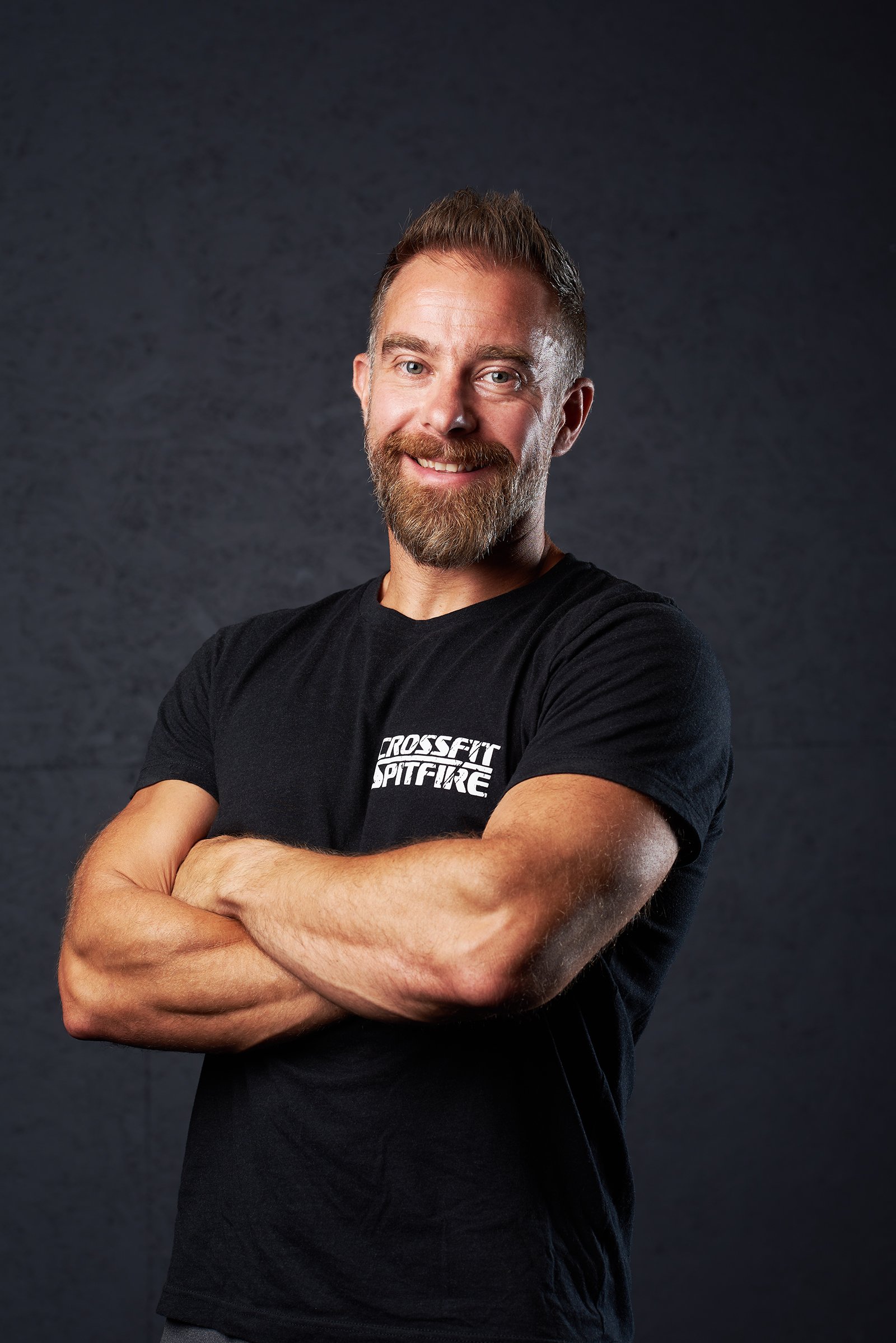 David has had an active involvement within the local regional, UK and European CrossFit Community both as an athlete and coach for a number of years.  Having spent most of his adult life around sport, competition, and helping others achieve their goals he is proud to support the best fitness community in the world.

Starting out as a competitive Sprinter and Hurdler throughout high school and for a number of years thereafter, David went on to serve as a Commissioned Officer in the Royal Air Force, subsequently participating in numerous Strength and Conditioning programs before being introduced to CrossFit by a fellow coach in 2011.

“CrossFit has transformed the way I train, and coach, in such a positive way and have met so many wonderful people along the way, and for this I feel very privileged to be able introduce others to this amazing training methodology here at CrossFit Spitfire”.

David received the ‘Directors Special Award’ at the Soldiering On Awards 2018 for the success of CrossFit Spitfire and his mentoring support to the Military Veterans Community for business start ups, including business planning, digital marketing and business consultancy. In addition, David is the X-Forces Ambassador for East Anglia providing support to the Veteran community through the X-Forces network.

David is a qualified Level 2 CrossFit Coach, and has had the unique opportunity to coach at a number of other UK affiliates, including as an Adaptive Coach.  He has also competed in numerous UK CrossFit competitions both as an Individual and in Team events, and has also judged at a number of high profile events, including as Head Judge.  He also holds a British Weightlifting Level 2 Coach certification and Officials Licence, and Strength and Power Level 1 alongside numerous other qualifications including extensive ‘FreeStyle’ Gymnastics experience.  He is also an experienced professional Automotive Test Driver and Engineer, holds a Degree in Engineering Management, a Motorsport Track Day Instructor & ARDS Race Licence Holder, Bushcraft Survival Instructor, qualified Private Pilot and keen Motorcyclist! 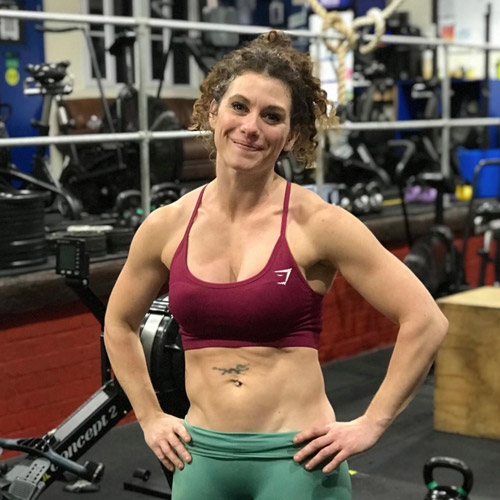 Sheena has had a life long passion for fitness, throughout her childhood and adult years. Uniquely experienced, Sheena spent a number of years serving in the Royal Air Force serving throughout the UK and abroad, during which time she was privileged enough to train along side a number of different forces including the Marines, which cemented her love of fitness. During her training she also won the PT award.

Upon leaving the service Sheena continued her fitness journey, and upon discovering CrossFit quickly fell in love with the sport and became a CrossFit Level 1 Trainer. Sheena also specialises in Strongman / Strongwoman training, running our specialist Strongman sessions in the Spitfire timetable. Alongside this Sheena is the Head Coach and Owner of CrossFit Spitfire Kids, and is also be available for Personal Training sessions both in the Box and Online.

Sheena is also our very own Precision Nutrition specialist, and is available to help individuals with their own nutrition needs whether it’s straightforward and safe weight loss, or better athletic performance. Simply contact Sheena at Valentina Fitness Coaching to get in touch! 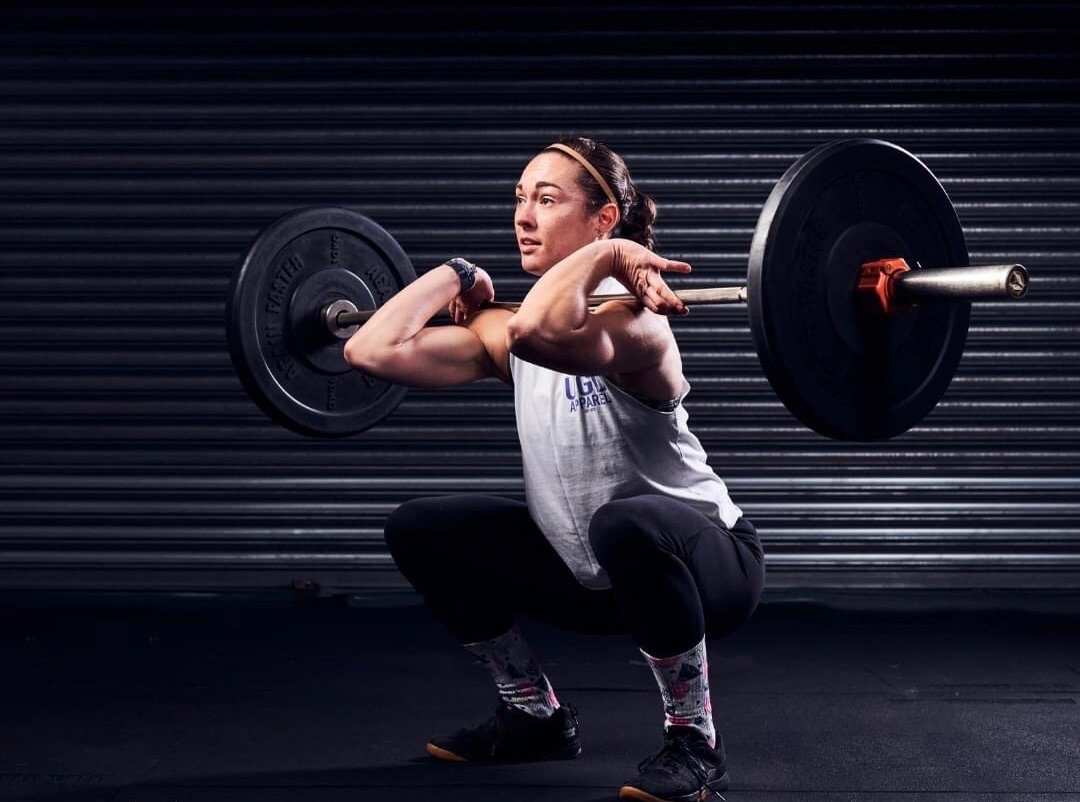 Originally from Norwich, Hannah already has a huge background in CrossFit after training and competing for CrossFit Colchester since 2012.   With one of the most impressive CV’s around, she holds a wide range of qualifications including: MSc Cardiac Rehabilitation distinction at the University of Essex, and a First Class BSc (Hons) Sports & Exercise Science degree. She also holds a British Weightlifting Level 2 Coach certification, alongside numerous other qualifications.

“Since I started my CrossFit journey, the programming and methodology have challenged me to dig deep to make things happen. I have never been stronger both physically and mentally than I am right now and couldn’t’t have done it without the support and friendship of the CrossFit Community.”

Hannah is passionate about constantly expanding her knowledge and loves meeting new people of all ages and ability, helping others develop and achieve their goals.

Hannah is also available for personal training sessions at Spitfire.  Contact Hannah today at HFit Personal Trainer. Needless to say we are very pleased to have Hannah as part of our team! 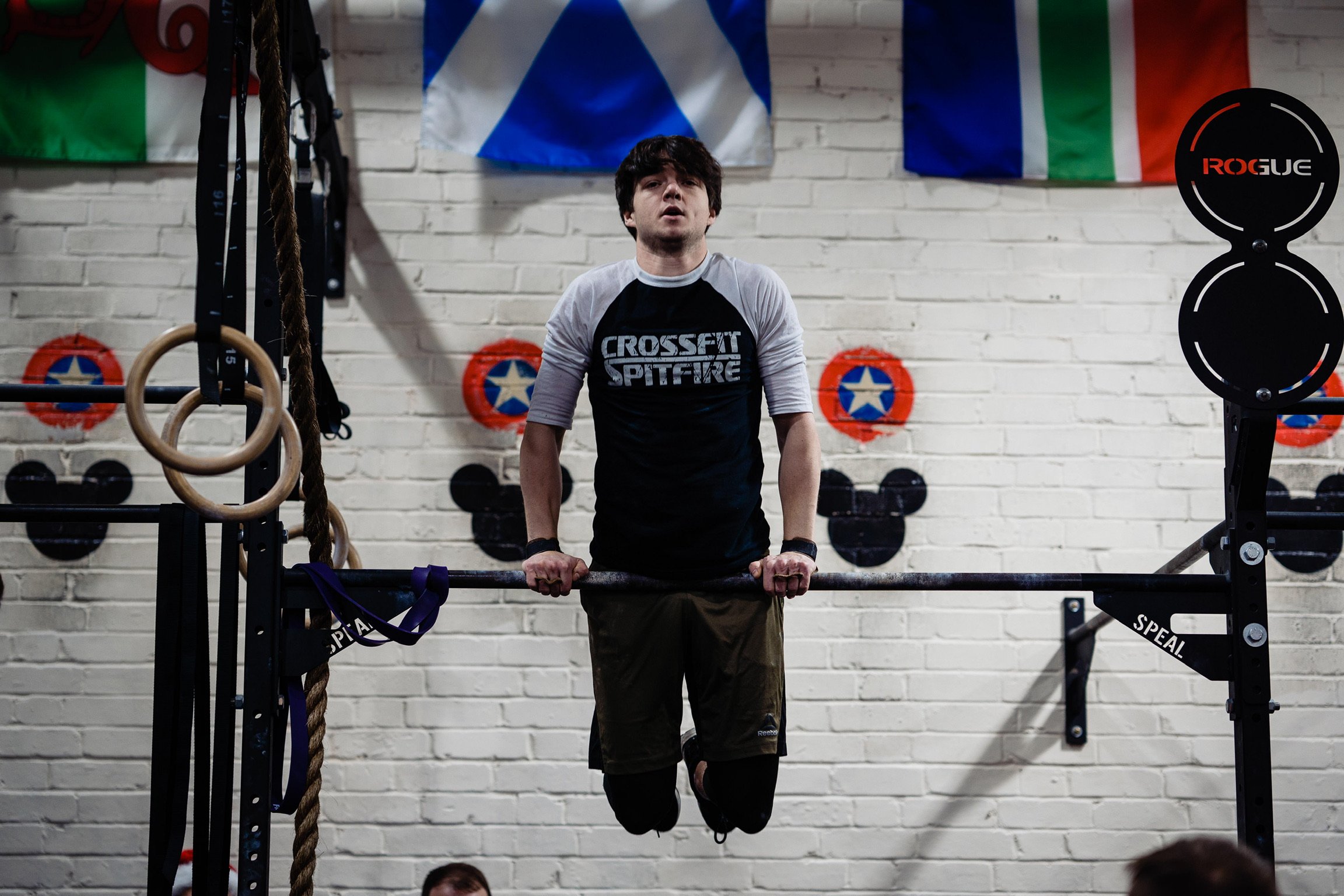 Ben is extremely passionate and keen about CrossFit. Technically very proficient as a Coach, and similarly adept as an Athlete, he is very much at home in the Spitfire community.

He has an extremely affable character, an ability to genuinely listen to others, helping everyone around him instinctively. His experience includes coaching classes for over a year at CrossFit Banbury as a CF-L1 prior to joining Team Spitfire, and also has Professional Diplomas in Clinical Sports and Exercise Sciences, and the Treatment and Management of Injury in Sport, amongst other things. He is also a fully qualified and professional Barista! 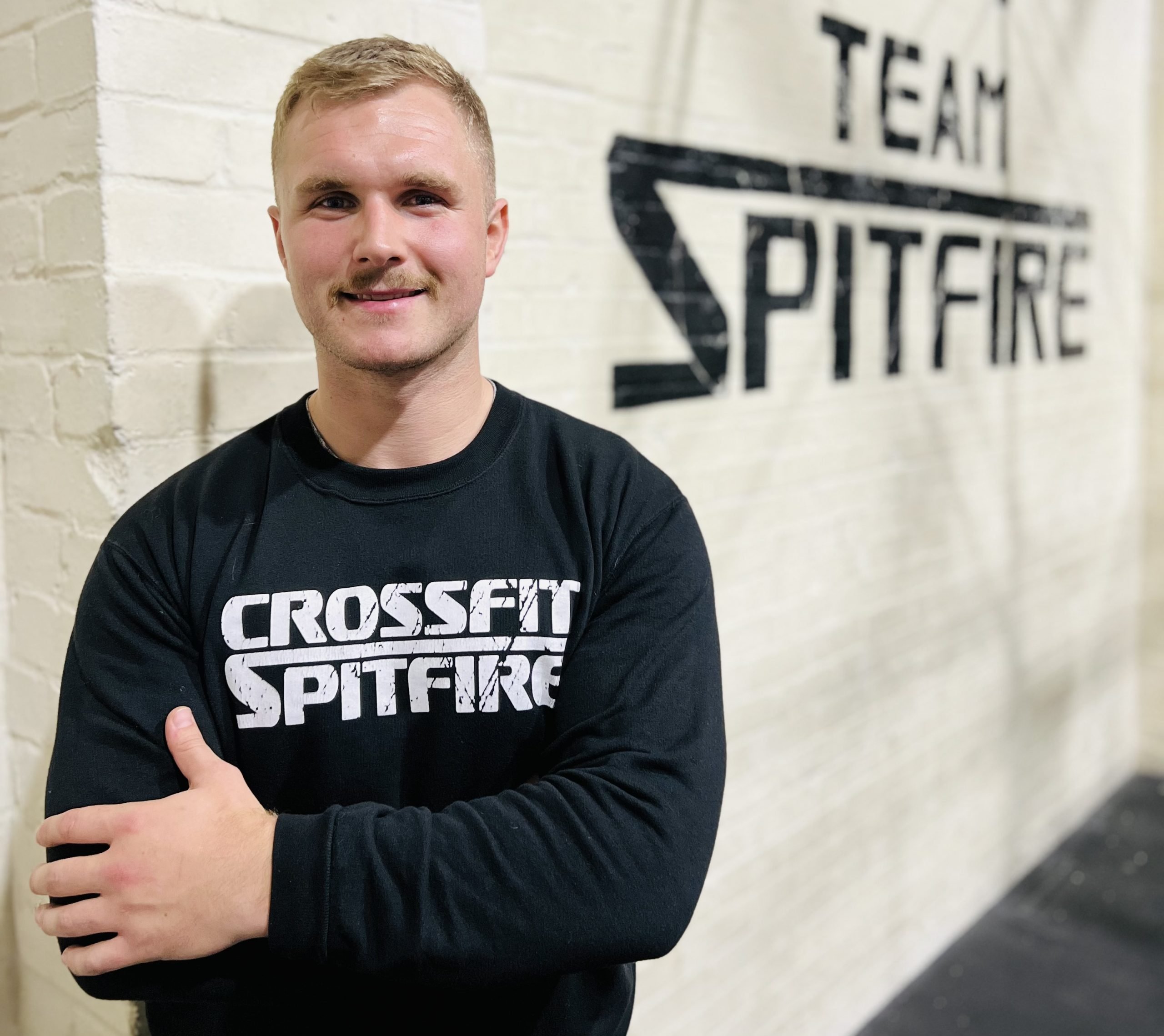 Having a degree in Sports Science & Coaching, Ollie has always had a strong coaching background, working with teams and individuals which has become his passion. Ollie completed his CrossFit Trainer qualifications and came over to Spitfire which has only ignited that passion further.

“I play rugby over at Wymondham RFC and have seen CrossFit immensely improve fitness for my clients and myself. Applying this alongside my nutrition coaching, it has been incredible to see the results when both are put together!”

Ollie also started his own business OC Coaching in 2022 providing Nutrition coaching and online programming to clients. Ollie is also available for personal training sessions at the Spitfire! 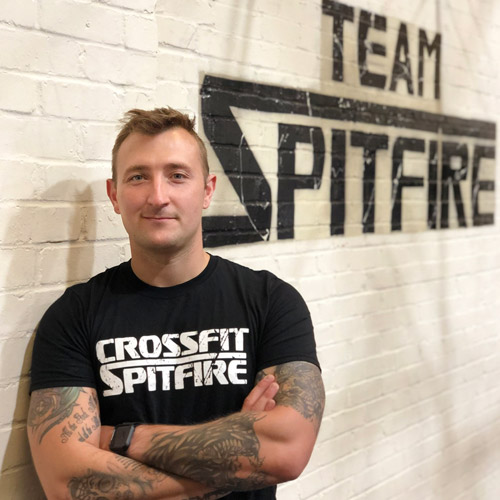 Gerhard made his move from South Africa back in 2012 in pursuit of a career in The British Army. Having always had a love for sports and fitness, he qualified as a Physical Training Instructor for the army in 2017 and currently holds a full time position at the gym at the 1st Queen’s Dragoon Guards barracks in Dereham whilst working towards his army career goal of becoming part of the Royal Army Physical Training Corps.

Crossfit came to the forefront of his training back in 2015 and is one of his ever growing passions. He has taken part in numerous competitions across the country and represented his unit in team events as well as individual events.

In addition to his army training, Gerhard has qualified from a range of courses surrounding sports and fitness such as mountaineering and rock climbing, as well as Level 3 Sports Nutrition. 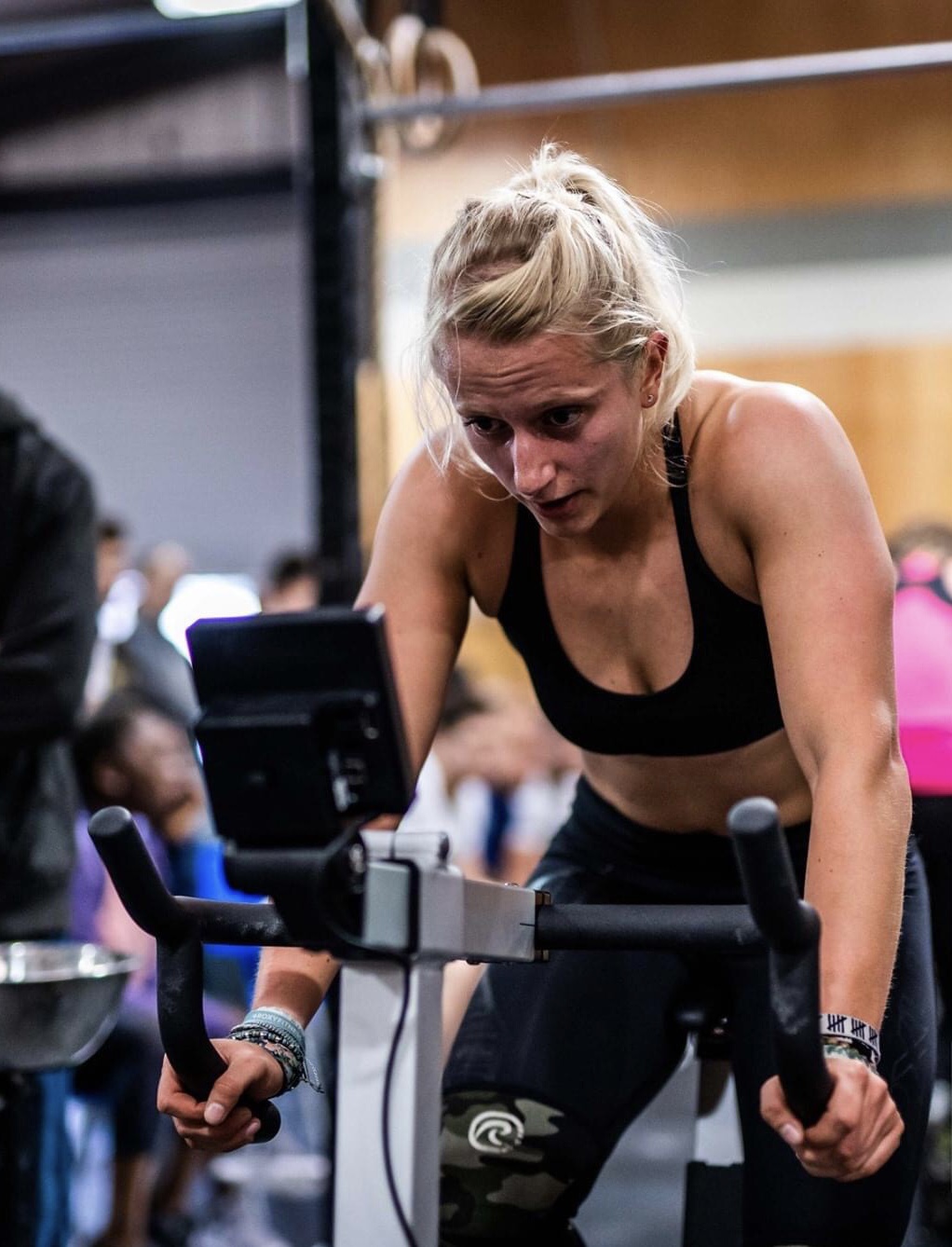 After years of long-distance running, trail running and OCR, Liz made the switch to CrossFit in 2017. She qualified as a CrossFit Level 1 Trainer that same year and started coaching CrossFit classes not long after. She went on to gain her British Weightlifting Level 2 Coaching qualification, as well as completing the CrossFit Aerobic Capacity and CrossFit Adaptive Athlete courses.

Although Liz loves the CrossFit methodology, she will always have a soft spot for Endurance sports. She therefore specialises in CrossFit Endurance training and runs the Endurance classes in the Spitfire timetable. 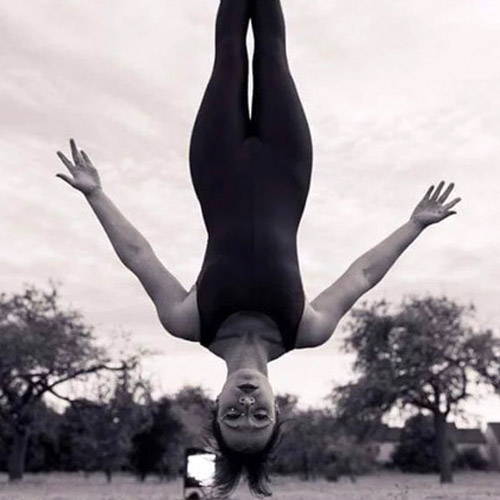 A flexible and versatile performer Joanne Jordan specialises in aerial hoop, bed of nails, corde lisse, hula hoop and fire. She is also an experienced teacher and runs group and one to one classes in aerial hoop, rope and hula hoop as well as circus skills workshops for all ages and abilities.

After joining the circus at 16 Joanne learnt most of her skills on the road traveling with various circuses first as a dancer, choreographer and poi artist then as a magicians assistant, side show performer and aerialist. Since then she has trained with Lost In Translation, Cambridge Community Circus and The Torwood wheelers and has had private tuition from highly respected performers both in the air and on the ground. She has also undertaken the two day ‘Rigging for aerial performance’ course with Bryan Donaldson of High Performance Rigging and Lost In Translation’s Train the Trainer.

For more information and booking: www.joannejordan.co.uk